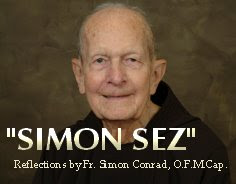 Fr. Simon, the senior friar of the Province, has a long career in teaching and communications. Teacher of English and librarian at seminaries in Herman PA and Victoria Ks, he also served as rector of the latter. Father authored two books, Master and Model and Brothers of the Sun and appeared on national television in a series aimed at youth. He also was communications director for the old Pennsylvania Province and was on the staff of the Franciscan Communications center in Los Angeles.

Simon Sez" will be a regular feature of the province web site and will be updated frequently. It can be viewed by following this link: Simon Sez