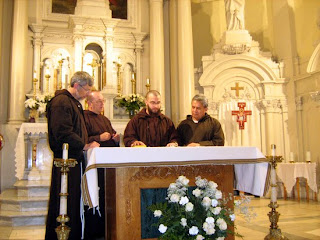 "Since for the glory of God, the Lord has given me this grace of living more perfectly and with a
firm will the Gospel of Jesus Christ, I, Br. Christopher Gama, in the presence of the assembled brothers, and into your hands, Father Charles., vow for all the days of my life to live in obedience, without anything of my own, and in chastity according to the Rule of Saint Francis confirmed by Pope Honorius III and according to the General Constitutions of the Order of Capuchin Friars Minor. Therefore with all my heart I give myself to this Brotherhood that through the work of the Holy Spirit, the intercession of the Immaculate Virgin Mary, our Father Francis and all the saints, and with the help of my brothers I may fulfill my consecration to the service of God and of the Church."
These were the words spoken by Br. Christopher Gama on Sunday, November 22, as he placed his hands in those of the provincial minister, Fr. Charles Polifka, and solemnly professed to observe the evangelical counsels of poverty, chastity, and obedience for the remainder of his earthly life. The event, celebrated within the context of the Sunday Mass, took place at Annunciation Catholic Church on the outskirts of downtown Denver.
This particular Sunday, the Solemnity of Christ the King, marked the culmination of five years of discernment regarding Br. Christopher's vocation to the Capuchin Franciscans. Brother entered the first stage of religious discernment, the postulancy program, in 1993 at St. Crispin Friary in downtown St. Louis. He was was the only one of three classmates to move on to the novitiate at St. Conrad Friary in Allison Park, Pennsylvania for a year of more intense prayer and discernment. Following upon that year, Brother laid aside the "clothes of probation" and received the Capuchin habit, vowing to live the evangelical counsels for three years. During that period, Brother spent time at Padre Pio Friary in Colorado Springs, St. Francis of Assisi Friary in Denver, and at San Damiano Friary, also in Denver, where he currently resides.
Sitting in the front pew at Annunciation Church were Brother's parents, Philip and Lalla Gama of Pueblo and Sally and James Pagano of Monument, surrounded by members of his immediate family. Also in attendance were a large number of Christopher's extended family, friends, FOCUS missionaries, religious, as well as classmates and professors from St. John Vianney and Redemptoris Mater seminaries.
Front row on the opposite side of the Church were Brother's newest family members, the Capuchin Franciscans. A large number of friars from the Denver and Colorado Springs area attended the celebration. Fr. Christopher Popravak, director of post-novitiate formation, and Fr. John Lager, director of vocations, stood as witnesses to Christopher's solemn profession.
During his homily, Fr. Charles Polifka, reminded Brother that today a real dying was taking place. In professing the evangelical counsels of poverty, chastity, and obedience, Christopher was taking the next step in that journey begun at his Baptism when he died with Christ in order to rise with Him. Additionally, Fr. Charles exhorted all of the brothers present to be models of that self-giving love which shines so brilliantly in the Trinitarian communion of divine Persons.
The Mass and Rite of Profession were followed by a celebration in the gym at nearby Annunciation Catholic School.
In addition to profession as a Capuchin Friar, Brother is also studying for the priesthood. He is currently in first theology at St. John Vianney Theological Seminary in Denver.
Please keep Brother Christopher in your prayers as he continues to seek God's will in his life and pray that the Lord will send us many more such men!
Photos of the celebration will be forthcoming. Br Christopher has created a YouTube slide-show presentation of the event which can be viewed here: Youtube Final Vows