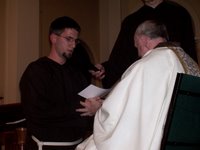 Brother Larry Bowers made his profession of temporary vows as a Capuchin-Franciscan friar at St. John the Evangelist Church, Lawrence, Kan., on Nov. 20. The ceremony took place within the context of an evening Mass and was well attended by friars, family members and parishoners.

Among those in attendance were representative friars from every friary in the Mid-America Province, Fr. Bill Kraus from Mexico, and Fr. Bill Weithorn, co-novice director from the Pennsylvania Province, as well as Larry's classmates from the Western America and Australia Provinces. The 14 pre-novices who are currently in the Investiture Program in Victoria, Kan. were also in attendance. Capuchin affiliate Bishop George Fitzsimmons, Bishop emeritus of Salina, Kan. was also in attendance and concelebrated the Mass in addition to giving a brief talk on vocations.

The son of Lawrence and Marla Bowers of Delia, Kan., Brother was born in 1976 and is a graduate of Delia Grade School and Rossville High School in Rossville, Kan.

After earning a B.A. in computer engineering from Kansas State University in 1999, Bowers was a computer network administrator at Kansas State for three years and then became a campus minister at St. Isidore Catholic Student Center at the university.

He took up residence as a postulant with the Capuchin Franciscan friars at St. Crispin Friary in St. Louis, Mo., in 2004 and made his novitiate this past year at St. Conrad Friary in Allison Park, Pa.

While in formation with the Capuchin Franciscans, Bowers has ministered at a food kitchen, tutored abused and neglected children, visited and assisted with activities at two nursing homes, and served Meals on Wheels.

Br. Larry will soon join the friars at St. Francis Friary in Denver, Colo. to begin the post-novitiate year under the guidance of Fr. Gene Emrisek. Please keep Larry and all the brothers in your prayers!