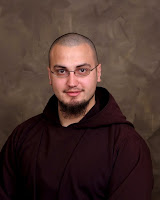 Br. Christopher Gama, O.F.M.Cap., of San Damiano Friary, Denver, will make profession of solemn vows at Annunciation Church on Sunday, Nov. 22, during a Mass beginning at 3 p.m.. Fr. Charles Polifka, provincial minister of the Capuchin friars of Mid-America will receive Br. Christopher's vows on behalf of the Church.

The son of Philip and Lalla Gama of Pueblo and Sally and James Pagano of Monument, Br. Chris entered the Capuchin postulancy program in St. Louis in 2003 at the age of 23. He made his novitiate at St. Conrad's Friary in Allison Park, Pa., receiving the Capuchin habit on Nov. 28, 2004, and making profession of temporary vows the following Nov. 22. Since then he has been stationed at Padre Pio Friary in Colorado Springs 2005-06, St. Francis Friary on Wyandot St., Denver, 2006-08, and now at San Damiano's where he is presently a student for the priesthood in the first year theology program at St. John Vianney Theological Seminary.

Brother studied at Sunset Park and Pitts public schools in Pueblo and graduated from South High School there in 1998. In high school, he was very active in athletics and played on his school's state championship baseball team.

On the college level, Brother has studied engineering at Colorado State University in Pueblo and Ft. Collins; Spanish at various schools in Colorado Springs, Denver, and Puebla, Mexico; and philosophy at Regis University and Vianney Seminary, graduating with bachelor's degrees in philosophy from both Regis in 2008 and Vianney in 2009.