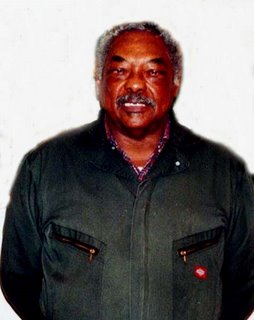 Affiliate Mitchell Branford, who died Sept, 10, the day after his 75th birthday, was buried Sept. 14 alongside three Capuchin priests in the Friars Plot in St. Louis.

Mississippi-born Branford, who joined the Catholic Church in 1981, served as maintenance engineer for the Capuchins' church and friary in St. Louis for 32 years — at St. Charles Borromeo 1974-81 and St. Patrick since 1981. Even earlier he worked with them at the Alverne Hotel and Chapel at 11th and Locust.

Mitch came to the friars as a retired Army master sergeant; and, in addition to maintaining the building and grounds at St. Patrick's, he regularly supervised the weekend rental of the church's parking lot for dome and convention center events and was well respected for his polite, yet efficient management of the lot.

Mitchell was more than a faithful employee, however, He was a totally dedicated friend and coworker of the friars at St. Patrick's. In his funeral homily, Fr. Simon Conrad referred to Mitch as having "a talent for kindness, a gift for friendship, and an easy kind of strength that others depend upon."

At the request of the friars at St. Patrick's, our Province made him an affiliate member in 2001, and the friars began calling him Brother Mitch. He was buried alongside Capuchin Fathers Joseph Adams, Daniel Conway and Aquinas Patch and fellow Affiliate Brother Jerry Webster at Resurrection Cemetery.

"If there happens to be a parking lot in heaven," Fr. Simon opined, "it is now under new management. Please, Brother Mitch, reserve a place for us."
© Capuchins 2022  |  Privacy policy