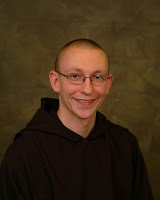 from Capuchin Province of Mid-America
Provincial Communications Office
Fr. Blaine Burkey, O.F.M.Cap., director
3553 Wyandot St., Denver CO 80211
Brother Ryan Tidball, former parishioner of St. Mary's Church, Greeley, Colo., will make first profession of vows as a Capuchin Franciscan friar at St. Patrick's Oratory, Denver, Dec. 8.
A 1978 native of Pierre, S.D., Brother Ryan is the youngest of the eight children of Lucille Lofgren Tidball of Pierre and the late Keith Tidball.
Tidball began studies for the priesthood in 2001 under the sponsorship of the Capuchins at Borromeo Seminary in Cleveland, Ohio, and earned a BA in philosophy summa cum laude from John Carroll University in Cleveland in 2005. His studies at John Carroll included a semester abroad at Oxford University, England, in the spring of 2004.
Tidball began religious formation with the Capuchins in 2005 as a postulant at St. Crispin's Friary, St. Louis, and entered the Order's intercontinental novitiate at St. Conrad's Friary in Allison Park, Pa., in 2006.
Following profession, Brother Ryan will be part of the religious community at St. Francis of Assisi Friary, 3553 Wyandot St., Denver, and will continue religious formation for a year as a post-novice under Fr. Gene Emrisek, pastor of Sacred Heart Church. Ryan hopes to continue then studies for the priesthood.
Tidball was baptized as a Presbyterian and first studied at county schools near Ft. Pierre, S.D. As a National Merit Finalist, he entered the University of South Dakota in Vermillion on theatre scholarships, but discontinued after a year.
During the next three years, he worked as a cook, stocker, maintenance worker, and seafood and meat clerk at various locations. During the Easter Vigil at St. Mary's in 2000, he entered the Catholic Church and began discerning a vocation to the religious life and the priesthood. ####
© Capuchins 2022  |  Privacy policy