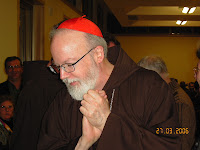 The Boston Globe recently published an article which highlighted the quiet activities of Washington's Centro Católico Hispano, just a short distance from the White House, and noted that it was not getting anywhere the attention of the Pope's visit to the nearby White House. Cardinal Sean O'Malley, who as a young priest strongly developed the Center, is reported as having said in a homily for a Mass for the Washington diplomatic corps in the 1970s "that he had heard from too many of the women who cooked and cleaned for them that they were treating their domestics shabbily." Many in the congregation of ambassadors and consuls general got up and left. O'Malley kept talking as the indignant big shots walked out. The Centro's current director, affirmed the truth of the legend and added, "And the people here, they don't forget that he was on their side, the poor people, the working people."