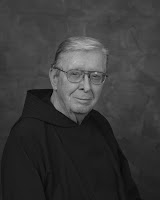 by Fr. Blaine Burkey, O.F.M.Cap.
Director - Capuchin Province of Mid-America, Communications Office
Fr. Joseph Schreck, O.F.M.Cap., 80, native of Marienthal, Kan., and longtime missionary in Puerto Rico, was specially honored at his funeral Feb. 12 at San Miguel Church in Utuado in west central Puerto Rico.
Well over a thousand people attended, including over a hundred diocesan priests, 30 Capuchin Franciscans, and eight bishops, including Cardinal Luis Aponte Martinez, archbishop emeritus of San Juan.
Tee shirts with Schreck's portrait on them were being sold and worn in the streets, and by decree of the civil authorities, flags were being flown at half mast.
Later on additional thousands of people lined portions of the streets and roads as the funeral procession moved Schreck's body the 60 miles from Utuado to Porta Coeli Cemetery in Bayamon.
Son of the late Henry and Adelheid (Finke) Schreck of Marienthal, Schreck was born and baptized in Marienthal in 1927. At that time, Capuchin-Franciscan friars still staffed St. Mary's Church and numerous other Catholic churches along State Rt. 96.
Joseph's father died when Joseph was six years old. By then there were eight children in the family—four boys, fours girls. Joseph was the third youngest. As a senior in high school, Joseph went away to the minor seminary—not a Capuchin one, but one run by the Crozier Fathers in Minnesota. He then completed college studies at seminaries of the Maryknoll Missionaries in New Jersey and Illinois.
Schreck "returned"—as it were—to the Capuchins in November of 1951, entering their novitiate in Annapolis, Md. After profession of religious vows in November of 1952, he began theological studies at Capuchin College in Washington, D.C.
Ordained a Catholic priest by Bishop John Baptist Franz at St. Mary of the Plains College in Dodge City in 1955, he went to Puerto Rico in 1956 and was stationed there ever since.
During those 51 years, he served 15 years as local superior, three years as first counselor of the viceprovincial minister and six years (1978-84) as viceprovincial minister.
His years of leadership mark the clear beginning of the subsequent puertoricanization of the Capuchin viceprovince. When he became viceprovincial minister, only seven of the 26 Capuchins in Puerto Rico had been born there. With Father Joseph's death only one of the 26 Capuchins presently on the island was born elsewhere.
In service of the church in Puerto Rico, Father Joseph served two years in country chapels, two in mobile chapels, 12 years as associate pastor, and 20 years as pastor of large parishes in San Juan, Ponce, Utuado, and Rio Piedras. He also directed large combination grade and high schools for 26 years, was spiritual assistant to Secular Franciscan Order fraternities for 25 years, and chaplain for a year at a tuberculosis sanitorium. The bishops of San Juan, Ponce, and Arecibo engaged Joseph in close collaboration with themselves for a total of 23 years. His titles at various times included archbishop's secretary, prosynodal judge, dean, episocopal vicar for pastoral affairs, defendor of the bond, member of the presbyteral council, and since 1995 chancellor and diocesan consultor.
At the time of his golden jubilee as a priest in 2005, Father reflected on his years as a missionary:
"On June 11, 1955, Our Lord and Eternal High Priest shared with me His priesthood, essentially the business of 'connecting' souls to God. I have had some great moments of 'connecting': an older man, never gone to church, dying of cancer; a still youngish woman who had lived on the 'farside' most of her life; a young man with TB afraid to leave his wife and newborn son; a hooker who had quite a time getting her act together. I was there, seeing grace work, helping a bit. What a privilege! What a joy! I imagine something like a fireman who pulled someone from a collapsing building; a diver sharing his 'air' with one whose tank is empty; a broker who made an exceptionally good investment for his client. Those moments have been precious! Unforgetable!
"There have been high and low profile positions, accomplishments and failures--but they have all been peripheral. The really big ones were the 'connecting' moments, for which I am deeply grateful."
© Capuchins 2022  |  Privacy policy