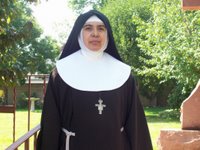 The origins of the Capuchin Poor Clare Sisters in Denver dates the Provincial Chapter of the Mid-America Capuchin Friars in 1986. Then Provincial Minister Charles Chaput (now Archbishop of Denver) and his council were asked by the friars to pursue the establishment of a community of the Second Order.