From the Desk of the Provincial Minister - May 2009
Fr. Joseph Mary Elder, O.F.M.Cap. provincials-desk 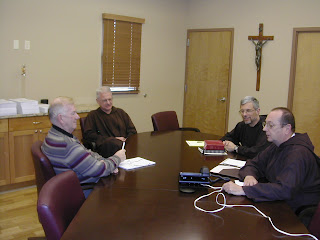 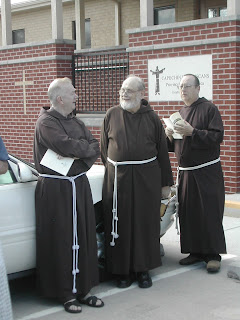 The “visitation” began on April 29. Brother Peter took part (see photo at left) in the blessing of the new Administration Building which was celebrated by Archbishop Charles Chaput, OFM Cap., the Archbishop of Denver. Brother Peter visited the friars in Denver and Colorado Springs and then journeyed to Ellis County to visit the friars there. He traveled on to Lawrence, to St. Conrad’s Friary, and then returned to Denver where he is concluding his visitation at St. Francis Friary. Before he leaves to return to Rome he is visiting with the Provincial Council (see top photo).

Provincial Visitations take place every year. The Capuchin Constitutions require the provincial to visit each friar and each friary at least twice in a three-year term. At these visitations, the provincial checks on the general well being of the friars, the life of the fraternity (how the friars are meeting the expectations of the Constitutions in their daily lives), and how things are going in the various ministries. A visitation from the General Councilor (or in some cases the General Minister) allows the friars to meet with someone who has the overall sense of the Capuchin Order and to reflect on how his life and fraternity meet expectations and values of the whole Order. It also gives the General Councilor a good sense of what is happening in the Order in this particular part of the world.

Capuchins are not men who are only members of a “province.” We are members of a world-wide fraternity of men who are striving to live the life of St. Francis in cultures that range from Papua New Guinea, Ethiopia and Eritrea, Switzerland, France, Turkey, Indonesia, Korea, China, Australia, South Africa – everywhere in the world.

A visit from a General Councilor makes each of us aware that we are not Capuchins alone in Kansas and Colorado. We are united with Capuchins all over the world. We are brothers to Ethopians and Papuans, with Indonesians and Italians, with Canadians and Brazilians. The whole world is our family.

We welcome Brother Peter Rodgers to Mid-America. He represents our universal brotherhood and calls us to a universal sense of brotherhood.
© Capuchins 2023  |  Privacy policy