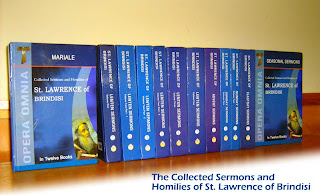 Word arrived yesterday from Gandolf Wild that the Order has finally made much of Lawrence of Brindisi's writings accessible to the English-speaking world.
Twelve volumes of sermons and homilies of our Doctor of the Church have been published by Media House, the Capuchin publishing house in Delhi India.
The sermons and homilies were translated by Fr. Vernon Wagner of the Calvary Province of St. Joseph.
The twelve volumes are available for $260 US currency.
This does not seem to include the cost of shipping and handling. For this reason it will probably be cheaper to consolidate multiple orders for the set.
I plan to order a set for the archives, where we already have a copy of the Opera Omnia in the original languages. I have also made the librarians at Denver's St. John Vianney Seminary and FranciscanUniversity in Steubenville aware of the set, and will probably try to alert others to it availability,If others friars or friaries within the province would like to have additional sets, I could order them at the same time as the archives set, with the understanding that the archives will be reimbursed for books and S & H by the persons (physical or moral) desiring the additional set(s).
I would like to take care of this before supplies are exhausted, so if you are interested please contact me quickly — more specifically before October 20, 2007.
Being a collection of sermons and hmilies, the set would not include Lawrence's critiques of the works of Luther and others. This would explain why the English set has less volumes than the Opera Omnia.
© Capuchins 2023  |  Privacy policy