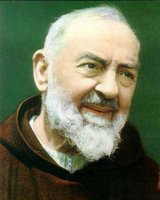 Today the Church celebrates the obligatory Memorial of St. Pio of Pietrelcina, better known to Catholics the world over as the beloved Padre Pio.

Born in the small village of Pietrelcina in southern Italy on May 25, 1887, Francesco Forgione entered the Capuchin novitiate at the tender age of 15. Remarkable for his life of deep prayer, humble austerity and long hours spent in the confessional, Padre Pio was also the recipient of divine mysteries. On Sept. 18, 1918, while praying before a crucifix, Padre Pio received a visitation from a luminous, celestial being (similar to the account of St. Francis centuries earlier) whose hands, feet and sides were dripping blood. When the terrifying encounter had ceased, Padre Pio found himself marked with the sacred wounds of Christ, the stigmata. He is the first known priest to bear the stigmata in the history of the Catholic Church. These wounds, a constant source of pain and embarrassment for the saint, he carried for fifty years. In a letter dated Oct. 22, 1918, he described the experience in a letter to his spiritual director:

"The heart wound bleeds continually, especially from Thursday evening until Saturday. Dear Father, I am dying of pain because of the wounds and the resulting embarrassment I feel deep in my soul. I am afraid I shall bleed to death if the Lord does not hear my heartfelt supplication to relieve me of this condition. Will Jesus, who is so good, grant me this grace? Will he at least free me from the embarrassment caused by these outward signs? I will raise my voice and will not stop imploring him until in his mercy he takes away, not the wound or the pain, which is impossible since I wish to be inebriated with pain, but these outward signs which cause me such embarrassment and unbearable humiliation" (St. Pio of Pietrelcina. Letter to Padre Benedetto of San Marco. Oct. 22, 1918. Padre Pio of Pietrelcina, Letters Vol. I 2nd Edition. English version edited by Fr. Gerardo Di Flumeri, O.F.M.Cap.).