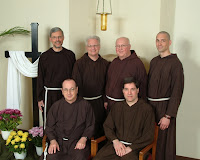 The first friar elected to the provincial council was Fr. James Moster. Fr. James, or Jim as is he is known among the friars, was additionally elected to serve as vicar provincial. In the event that the provincial minister would become incapacitated, Fr. James would become acting provincial. The 2nd councilor elected by a majority vote to the provincial council was Fr. Christopher Poprovak. Fr. Christopher currently serves as novice director to the NAPCC Intercontinental Novitiate in Allison Park, PA. The third friar elected was Fr. Frank Grinko. Fr. Frank, the current postulancy director, also served as a councilor under Fr. Mike Scully of the outgoing administration. Fr. John Schmeidler was the final friar elected to the council. Fr. John, who lives and ministers in Lawrence, KS., will act as 4th councilor.

Presiding at the chapter was general definitor and Mid-America's own, Br. Mark Schenk. Br. Mark was cheered by the friars as he oversaw the chapter in lieu of the general minister.

Please keep the new administration in your prayers as we begin our new triennium.