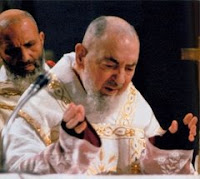 Reuters is reporting the following story on the exhumation of Capuchin saint, Padre Pio:

"ROME, March 3 (Reuters Life!) - The body of the mystic monk Padre Pio, one of the Roman Catholic world's most revered saints who died 40 years ago, has been exhumed to be prepared for display to his many devotees.

The body of the Capuchin friar, who was said to have had the stigmata -- the wounds of Christ's crucifixion -- on his hands and feet -- is to be conserved and put in a part-glass coffin for at least several months from April 24.

A Church statement said the body was in "fair condition", particularly the hands, which Archbishop Domenico D'Ambrosio, who witnessed the exhumation in the southern Italian town where Pio died, said "looked like they had just undergone a manicure".

A spokesman for the monastery at San Giovanni Rotondo said he believed morticians would be able to conserve the face of the bearded monk well enough for it to be recognisable...."