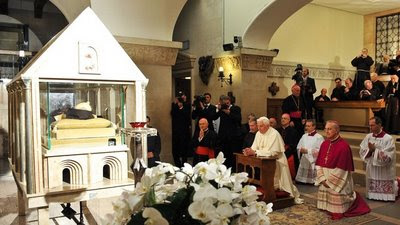 "Whispering in the Loggia" has already reported on Pope Benedict XVI's visit today to the Padre Pio's tomb in San Giovanni Rotondo":

"In a pilgrimage that's been much awaited across Italy, today the Pope hopped across the Boot to visit San Giovanni Rotondo and the sanctuary of St Pio of Pietrelcina -- Padre Pio, the 20th century Capuchin mystic who's the most-turned to figure among Italians at prayer... Jesus included.

"As one would expect given Pio's massive global cult, turnout was measured in the 'hundreds of thousands':

"At the beginning of the Year for Priests, Benedict XVI has launched another model for all priests showing to all the example of the friar from Pietrelcina: 'A simple man of humble origins, 'seized by Christ' (Phil 3:12) ... to make of him an elected instrument of the perennial power of his Cross: the power of love for souls, forgiveness and reconciliation, spiritual fatherhood, effective solidarity with the suffering. The stigmata, that marked his body, closely united him to the Crucified and Risen Christ '...." Click here to see the whole article.
© Capuchins 2022  |  Privacy policy