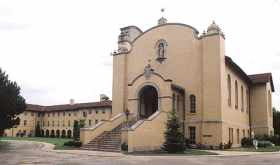 Postulant Roger Marker and a large number of other postulants from other Capuchin circumscriptions expect to begin the 2007-08 novitiate year on July 29 northeast of Burlington in southeast Wisconsin. Having two novitiates running at once is the North American-Pacific Capuchin Conference's way of changing the novitiate year from the Church's liturgical year to the normal academic year without needlessly prolonging the present postulancy year. The novitiate compound at Allison Park will be empty from the end of the 2006-07 novitiate year in November until the 2008-09 class arrives in July 2008. Mid-America's Br. Jeff Ernst, assistant novice director in Allison Park since 2003, has been named novitiate director at Burlington. The facility there was once the philosophy house of the Polish Franciscans of Pulaski WI. From 1970 till 2002, the 180-acre campus was a run as a retreat center. The present postulants will begin the pre-novitiate "investiture" program at Victoria, Kansas, on May 29.
© Capuchins 2022  |  Privacy policy