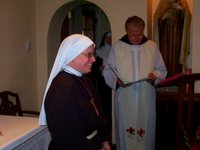 In a small midday ceremony, amongst her Capuchin sisters and brothers, Kellee knelt down before the image of the San Damiano Cross as Mother Maria de Cristo cut her hair.

Kellee then received the habit of probation: a brown tunic, white veil, cord, and a Tau cross. She left the chapel and returned minutes later wearing her habit for the first time, her face full of joy. Asked by what name she would begin her new life in Christ, Kellee answered: Sr. Anna Shalom of the Holy Spirit.

Sister entered the Capuchin Poor Clare Monastery on Dec. 14, 2003, as a postulant. A native of Loveland CO, she has one full sister, a stepsister, and a stepbrother. Sr. Anna chose her religious name after learning about Sr. Clare Shalom, an U.S.-born Capuchin Poor Clare who lived in San Giovanni Rotondo - the same village where Padre Pio spent most of his life as a friar.

The sisters and friars celebrated the event with a nice lunch following the ceremony. Please keep Sr. Anna Shalom of the Holy Spirit in your prayers as she begins this special year in her religious formation.

See more photos from the ceremony.