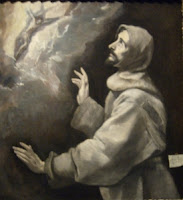 The year was 1224. No longer the head of the Order he had founded and disheartened with the improvisations of the newer brothers, an aging Francis retired to Mount Alverna to pray.

Alone on the top of the mountain, Francis was caught up in ecstacy and beheld the Crucified Christ enveloped in the six wings of a seraph. In this moment the stigmata, the sacred wounds of Christ, were imprinted upon his hands, feet, and side.

Francis had asked God that before his death he might experience both the love with which Christ loved from the Cross and the physical pain of His crucifixion. Both of his requests had now been answered.

In the history of the Church, St. Francis is the first person known to historians to receive the stigmata of our Lord. Others have followed, including Capuchin Poor Clare St. Veronica Giuliani and Capuchin Friar Padre Pio de Pietrelcina.

Though no longer in the universal calendar of the Church, the Feast of the Sacred Stigmata is still celebrated by the Franciscan family on September 17.
© Capuchins 2022  |  Privacy policy