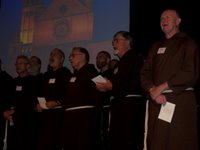 The Brown Robe Gala was held on Friday, October 6 at the Grand Hyatt in Denver, CO. The gala is a major fundraiser for the Capuchin Friars of Mid-America and helps to support Capuchin ministries as well as the formation and education of friars in formation.

This year's gala began at 5 pm with a silent auction which featured many beautiful items including a large assortment of hand-made bags and bowls all the way from Papua New Guinea. Dinner followed during which the audience viewed a nice clip of the Capuchins at ministry.

The Live Auction and direct appeal began shortly after 9 pm. The live auction included many great items among which were Br. Eugene's famous cookies, a helicopter ride, dinner with the student friars at St. Francis Friary in Denver, wonderful club seats at a Bronco's game, and a handmade gingerbread nativity display to be crafted by Fr. David Songy.

The evening ended shortly after 10 pm with a raffle drawing and was followed by the Capuchin Cafe. The friars thank all who attended and who continue to support our way of life through their time, prayers, and generosity.

For more photos from the gala, go to the album.