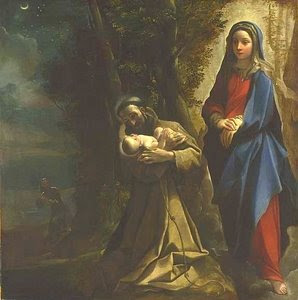 Each year we place the molded figures of shepherds, lambs, traveling kings and a young wandering couple beneath our carefully constructed make-shift stables. It is known by many names: the nativity scene, Christmas crib, Manger, or creche, but scarcely do we give the origins of this holy remembrance more than a passing consideration.

History, however, testifies to the beginnings of this devotion as of Franciscan origin. Distrubed somewhat by the pomp and materialism already arising around the celebration of Christmas at that time, St. Francis desired to celebrate the feast of the Lord's Nativity in a way that highlighted the true poverty and simplicity of Christ's birth.

In 1223, Francis had decided to celebrate the solemn occassion at a hermitage in the nearby city of Greccio. The following account comes from the Life of St. Francis by St. Bonaventure:

"It happened in the third year before his death, that in order to excite the inhabitants of Grecio to commemorate the nativity of the Infant Jesus with great devotion, [St. Francis] determined to keep it with all possible solemnity; and lest he should be accused of lightness or novelty, he asked and obtained the permission of the sovereign Pontiff. Then he prepared a manger, and brought hay, and an ox and an ass to the place appointed. The brethren were summoned, the people ran together, the forest resounded with their voices, and that venerable night was made glorious by many and brilliant lights and sonorous psalms of praise. The man of God [St. Francis] stood before the manger, full of devotion and piety, bathed in tears and radiant with joy; the Holy Gospel was chanted by Francis, the Levite of Christ. Then he preached to the people around the nativity of the poor King; and being unable to utter His name for the tenderness of His love, He called Him the Babe of Bethlehem. A certain valiant and veracious soldier, Master John of Grecio, who, for the love of Christ, had left the warfare of this world, and become a dear friend of this holy man, affirmed that he beheld an Infant marvellously beautiful, sleeping in the manger, Whom the blessed Father Francis embraced with both his arms, as if he would awake Him from sleep. This vision of the devout soldier is credible, not only by reason of the sanctity of him that saw it, but by reason of the miracles which afterwards confirmed its truth. For example of Francis, if it be considered by the world, is doubtless sufficient to excite all hearts which are negligent in the faith of Christ; and the hay of that manger, being preserved by the people, miraculously cured all diseases of cattle, and many other pestilences; God thus in all things glorifying his servant, and witnessing to the great efficacy of his holy prayers by manifest prodigies and miracles."

May our Seraphic Father St. Francis intercede for us, that this Christmas may truly be a time of holy remembrance and joyful anticipation.
© Capuchins 2023  |  Privacy policy