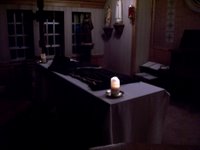 Friars from St. Francis and San Antonio Friaries in Denver, CO. celebrated the Transitus on Tuesday evening, Oct. 3 with their guests, the Dominican Friars. The Transitus is a commemoration of the death of St. Francis of Assisi.

One version of the story describes a terribly sick Francis, knowing that he is about to die, instructing his friars to bring him to the Portiuncula. Francis had a great love for this little chapel dedicated to the Virgin Mary and it was here that he wished to leave the world. Nearly blind, his body racked with pain and the wounds of the stigmata, Francis asked to be laid upon the ground and stripped of his clothes that he might die utterly poor. However, Br. Elias, Francis' successor, commanded the saint under obedience to wear a habit lent by another brother. Francis acquiesced, joyful to be able to forsake his own will even in the end for holy obedience. After asking that the passage from John 13, in which our Lord washes the feet of his disciples, be read to him, Francis breathed his last.

As is becoming tradition in Denver, the Dominicans joined the Capuchins to mark this holy occasion (and the Capuchins usually celebrate the feast of St. Dominic at the Dominican friary). The evening began with evening prayer followed by a small social, a nice dinner prepared by Br. Eugene and ended the evening with a reverent commemoration of the death of our holy founder. Tomorrow the Church celebrates the feast of St. Francis (which for the friars is a Solemnity).